It’s called Big D New Year’s Eve 2010.  One of the most spectacular New Year’s Eve parties in the country will be held at Victory Park, Dallas Texas beginning at 6PM on Thursday December 31st, 2009.  At 7PM The Dallas Stars will be inside the American Airlines Center playing the Anaheim Ducks, while outside on the Chevy Music Stage the bands will start to kick the party in to action. 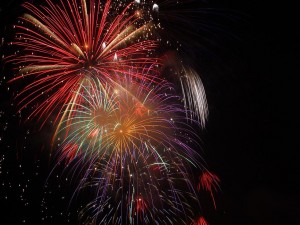 Join in the countdown to The New Year as you watch the Old Year tick away on the mega screens and get ready for the fireworks show at midnight  WFAA will broadcast live from Victory Park beginning at 11PM until 1230AM.  You will need a wristband to go to the party.  They are free and available in advance at various Dallas/Fort Worth Tom Thumb locations and at the American Airlines Center Box Office.  A limited number of wrist bands will be available on a first come first serve basis at the gate on the night of the event.  Arrive early for one of these.  Food and drink, including alcohol, will be available for sale at the party.  You may not bring your own.  Dart will run light rail service until 1AM for all you party goers.  This is the recommended mode of transportation as parking in the area will be limited.