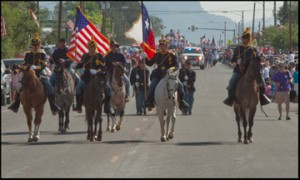 At an elevation of 5050 feet above sea level, Fort Davis is the highest town in Texas.  The coolest 4th takes place in Fort Davis, Texas every July.

With a summer average high temperature in the mid 80’s we decided to leave the hot city behind and head to the mountains to enjoy The Coolest 4th.  And enjoy it we did.  Events took place on the closest weekend, being a small town and all, everyone would be free to attend and enjoy the festivities.  Vendors began setting up their booths around the courthouse on Thursday.

By Friday morning they were open selling lemonade, ice cream and all types of food items from turkey legs to tacos and burritos.  Others set up booths with their hand made jewelry, various clothing items as well as hand carved wood furniture.  Friday evening at dusk, towns people and visitors alike headed out to Jeff Davis County Park on the edge of town for “The Great Fireworks Display”.

Saturday morning found everyone headed downtown for “The Great Parade” led off by National Park Personnel dressed in their 19th century army uniforms,  followed by many colorful floats,cowboys atop their horses and even one intrepid old timer riding along horn steer.

After the parade it was time to line up for “The Great Barbeque” at the Courthouse and then on to “The Great Gun Fight at Memorial Square.  From there it was off the the Fort Davis National Historic Site to enjoy the Small Arms Demonstration.  An outdoors Saturday night dance took place for those not wanting to wrap up the fun too early. 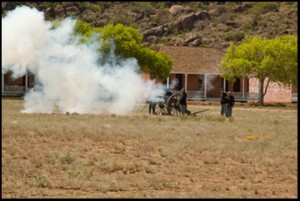 And finally, On Sunday, Living History Activities at Fort Davis National Historic Site, concluding with an Artillery Demonstration and Flag Lowering Ceremony.  We’ll be back next year!