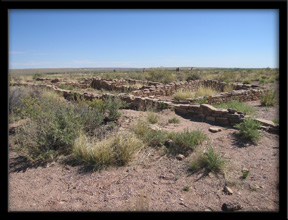 Puerco Pueblo at mile marker 11 is a partially excavated Puebloan village occupied between AD 1250 and 1380.  A 1/3 mile paved trail explores this large site of 100-125 rooms built around a rectangular plaza near the Puerco River.  In this usage of the Spanish word puerco means dirty or muddy.  Within the plaza are 3 kivas or underground ceremonial chambers.  These ancient people, possibly related to the Hopi and Zuni were the Southwest’s first farmers.  They grew corn, beans and squash supplementing their diet with wild plants and small game including rabbits and prairie dogs.   Due to the large amount of chipped stone artifacts found here (mostly petrified wood) they probably manufactured tools and we do know from uncovering items such as imported pottery that they actively traded with other groups of ancestral people.  A series of severe droughts beginning in A.D. 1215  lasting until A.D. 1299 contributed to the decline in population and eventual abandonment of the site by A.D. 1400.  The culture of these ancient people lives on in the works of writers and artists of today.  Many present day Hopi and Zuni people practice their religion and hold ceremonies in kivas.